We were up at 4.00am in time to pack and get to the railway station to buy tickets for our train journey to Palanpur.   The ticket office opened at 6.00am instead of 5.30am as we were informed.   Oh well, it was going to be a long day anyway!

Second class only and for a journey lasting nine hours and stopping at 38 stations it was a bargain price of 70 rupees each (75p).    We settled in our seats with emergency rations of water and biscuits.   There would be plenty of vendors on the various stations selling food, chai and coffee.

We started our journey in the dark and watched the sun rise over the countryside.   At every station there were passengers and the carriages soon became full.   The time went by very quickly.   Plenty of things of interest out of the windows, and the passengers were very chatty.   Where did we come from?   Where were we going?   Did we like India?  Lots of photographs and exchanging of e mail addresses.

Station platforms full of people coming and going.   Luggage, boxes wrapped in calico, chickens in crates, barking dogs, cows, musicians, holy men, groups of Jains on a pilgrimage.    Railway crossing with cars, lorries and motorbikes waiting for the train to pass.   A sign for a bump in the road, with the 'p' missing.   People walking in the country side, where did they come from?   No sign of a village anywhere.

As we neared Palanpur the train slowly emptied of passengers.   One family from Bhuj were travelling to their special temple, only to return again that evening on a 'sleeping' coach.

At Palanpur Samshu was there to greet us with garlands of roses.  He had driven up from Udaipur that morning.    We were heading for Danta only an hour away, but first a cup of chai.

We were in Danta in October and this time I managed to get photographs of the terracotta horses in  the Adivarsi shrine. 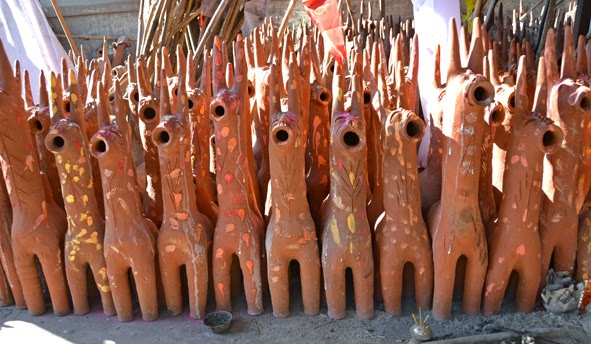 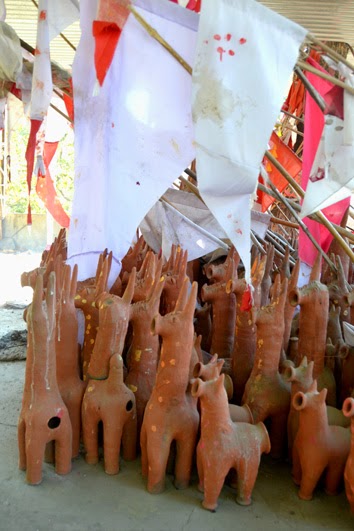 and smaller ones
the size is determined by the wish granted 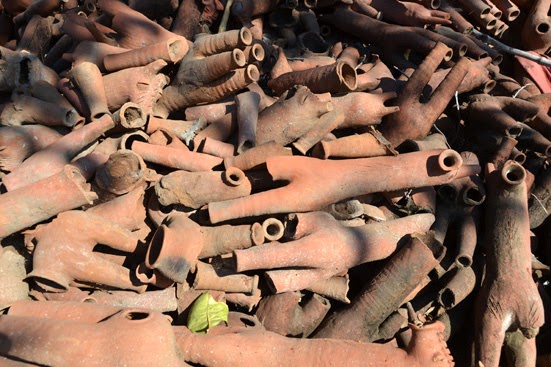 as the shrine becomes full old and broken images are discarded

We stayed for two nights.    After a long day's travel we had the best sleep ever.   The next night was crazy.   With a wedding going on in the village, which started quietly, all was well.   Then there were the fireworks and the music was ramped up to full volume!    Well, it is the Wedding Season and they did sound like they were having a jolly good time.

Posted by Tiggy Rawling at 14:51 No comments:

A day out with Mr. Jethi

Mr. Jethi is a font of all knowledge, indeed he writes the very informative guide to Kutch

We set off early first stopping at Kotay, last visited ten years ago with Mr. Jethi.  It has the remains of an old city and several temples thought to be 10th century.

The 9th century Sun Temple ten years ago stood in splendid isolation amidst the jungle greenery and in a dilapidated condition, sand blasted and weathered over the centuries, now it has been beautifully restored. 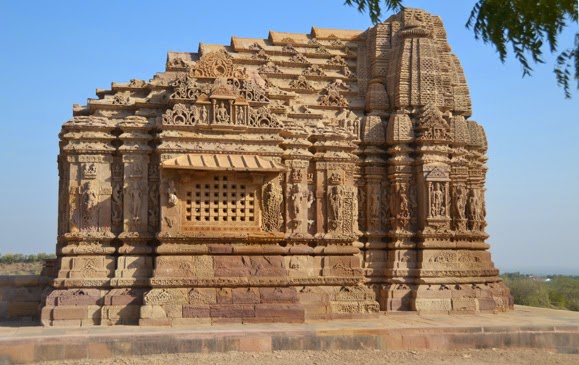 onwards to Bhirendiara where we have to get permits to travel north to the Great Rann.
the land is semi desert, very barren except for small shrubs, the castor oil plants and the babul trees, originally planted to preserve the land from the encroaching sand.

Bhirendiara is a small village approached along a sandy road.   The sand is so fine it is used as talcum powder, apparently! 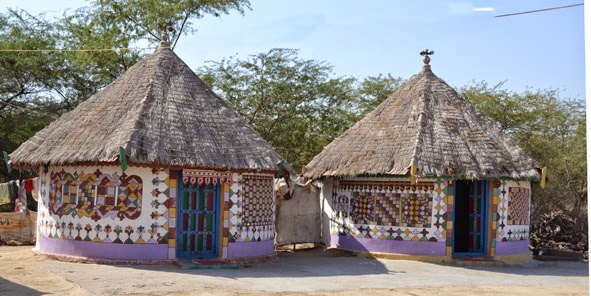 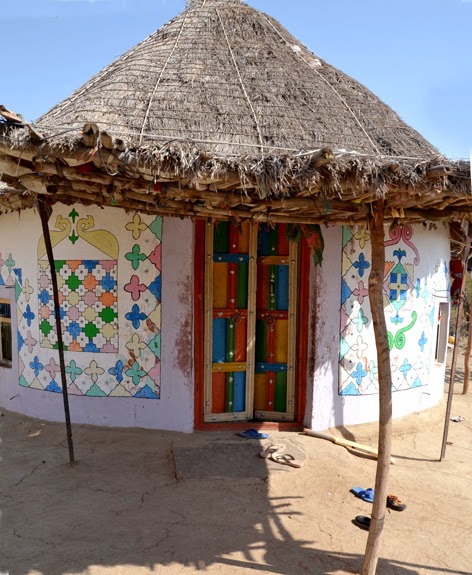 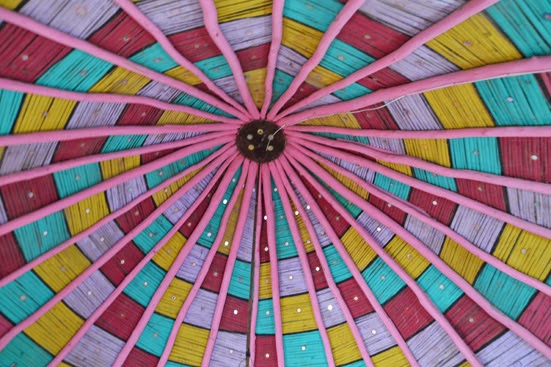 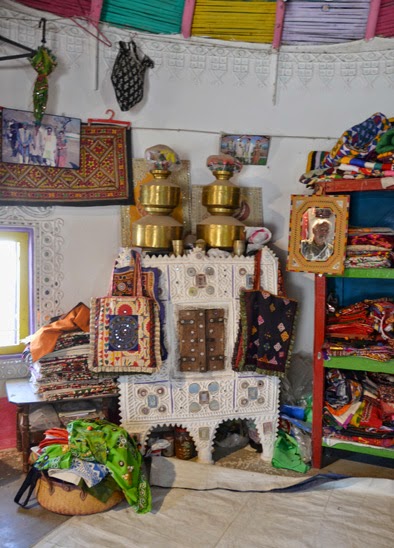 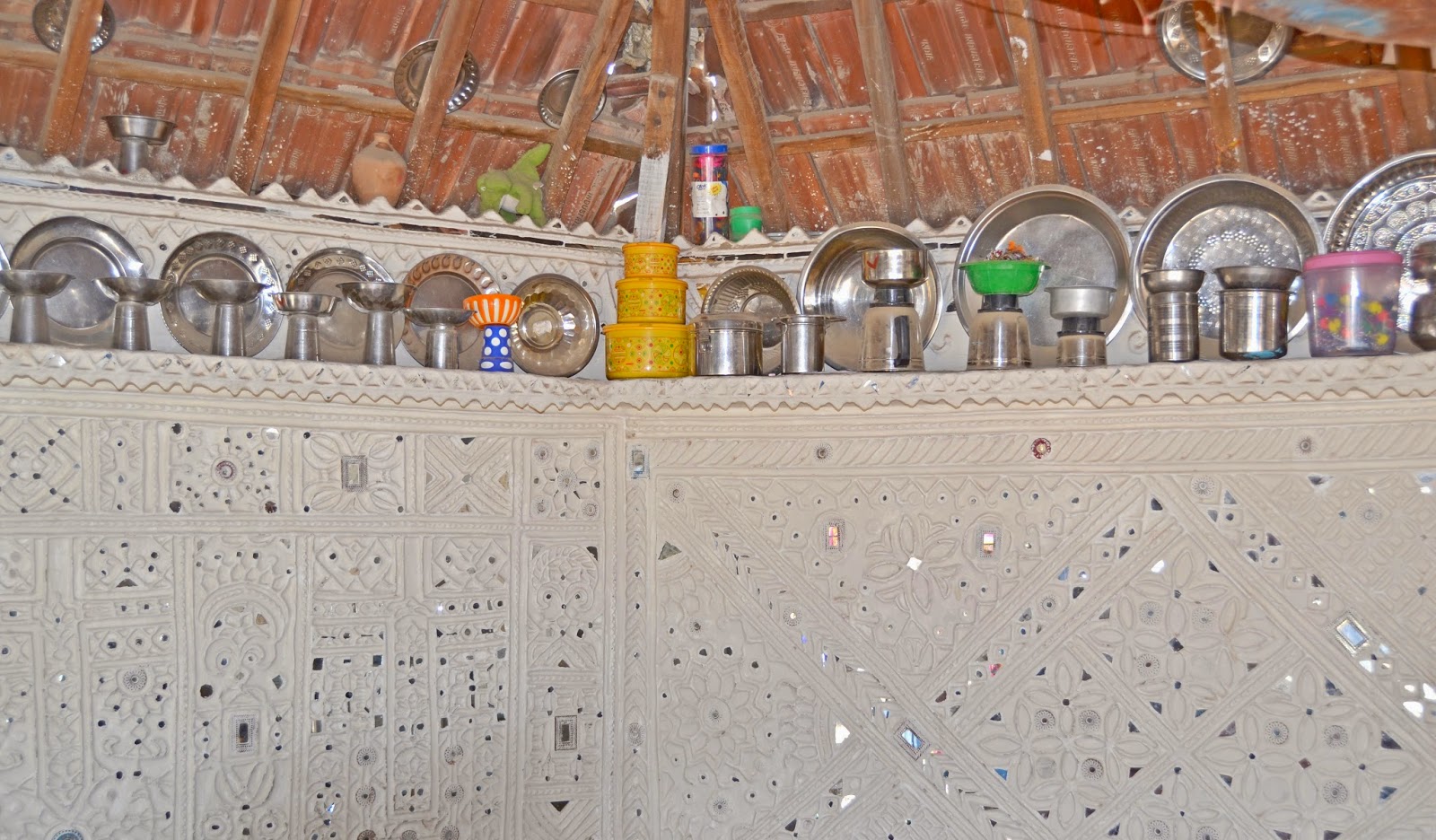 interior of house with a shelf full of stainless steel kitchenware
the walls are decorated with clay mixed with camel dung, kneaded and
rolled into tubes which are used to form patterns which resemble the
patterns used in embroidery.   When dry the wall is wash using a white
earth colour and small mirrors are set between the designs 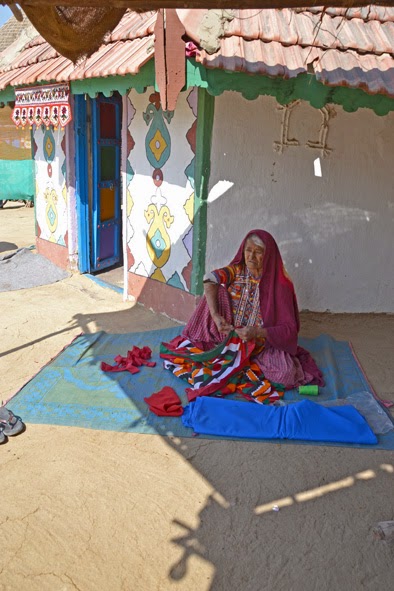 the villages make most of their income from tourists, and quite right too since we trample
around, looking here and there    during our visit about three groups of visitors arrived

the quality of work over the years has diminished which is not surprising - we know how long it takes to hand stitch anything!    the fabric on this piece is printed poly cotton with big stitches, something that can be made relatively quickly and sold for a good price.    The shop was interesting, although I wasn't tempted to buy 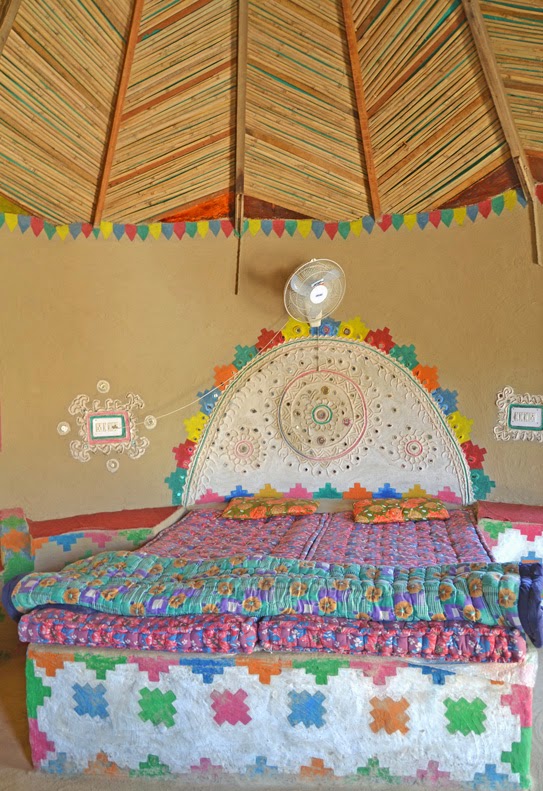 how about this for a bed?!!!  oh yes, there is a very nice western bathroom as well

the village is split into two, one half is Muslim and the other Harijans (God people) -originally known as untouchables, the name was given to the Meghwal people by Ghandi
although the two communities live apart they get on very well together 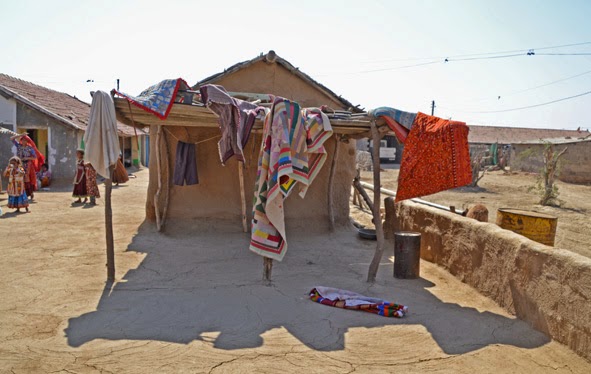 in the Muslim half quilts having an airing in the sun 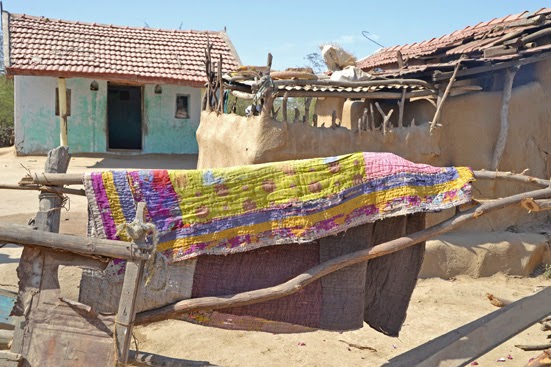 in the Harijan part a very much used quilt

after lunch it was only a short trip to get to the Great Rann of Kutch, popularly known as The White Desert.    We were a little disappointed!  The Ranotsav annual desert festival has become so popular that the land is now home to tented accommodation and bunghas, complete with the NEC of the desert     it rather spoilt what should have been a beautiful experience, having visited Dholavira and the Little Rann where camps were not so visable 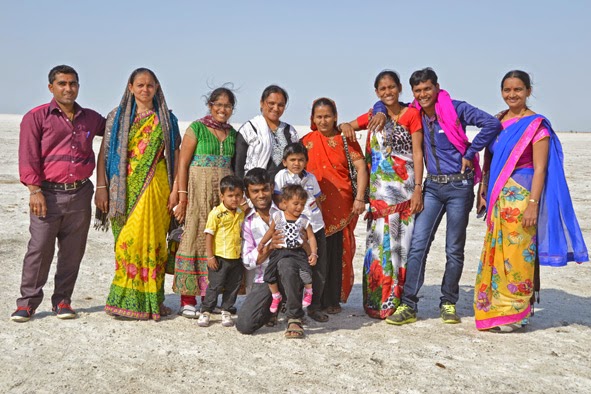 if you have made it to the end, thanks for reading!!!!

Posted by Tiggy Rawling at 11:35 No comments:

to find the Great Indian Bustard

an endangered species found only in Kutch and north Rajasthan we were in good company.   Mr. Jethi's nephew joined us, a bird spotter extraordinaire, who took time off work to join us, and a warden of the Forestry Department.

The Banni Grasslands is the GIB habitat.   In the summer they are knee high in grass.  This time of year it is dry.   Lots of little hoppy birds but not a GIB which stands at around 5ft tall.

A side trip to Jackau interested me.   It's right on the west coast of Kutch and I have told there is nothing to see, except at I found out, hundreds of fishing boats.

As you fly into Bhuj the coast is covered with rectangular marks, salt pans.   Gujarat provides India with salt, and seeing the process is quite amazing. 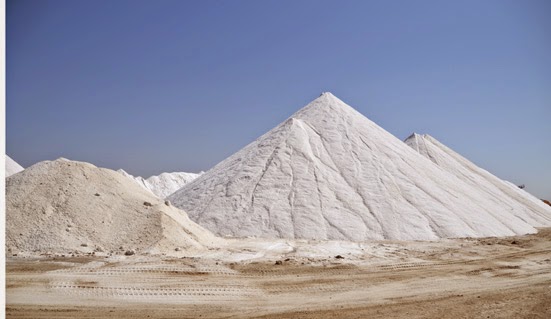 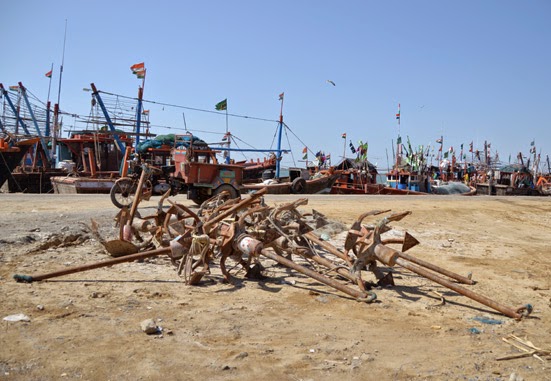 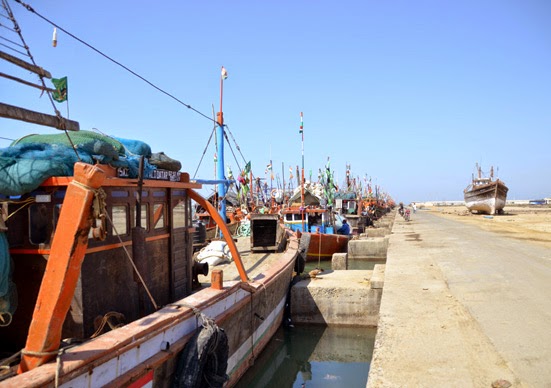 the fishing boats, at least three deep, stretch as far as the eye can sea
with the Pakistan border 150 nautical miles away    there has always been contention
in these waters.  Indian/Pakistan fishermen straying across the boundary and ending
up in jail.  Now fitted with GPS there is less chance of this happening   the boats all
go off together landing their catch in big ships ready to transport it to wherever.

And as to the GIB, later in the afternoon the warden was alerted by one of his men that
there had been a sighting.    Goodness me, not only did we see one but five and there are
only six in the whole of Gujarat.   Big tick.

Note:   I love textiles and Keith loves bird photography.   We both enjoy each other's interests, which makes for a happy holiday.   If you really need to see what a GIB looks like,
check out Keith's website in a couple of weeks.  They are quite incredible.  We were very lucky having two extremely knowledgeable guides with us.   Very happy Mr. R
Posted by Tiggy Rawling at 13:57 1 comment:

We've been far away from any connection with the outside world for over two weeks, no Internet, papers or television.  It was quite refreshing.

The journey started in Bhuj, Kutch, staying out of town in a Safari Camp, waking up in the morning to bird song.   A trip into town to see our friend Mr. Jethi, who knows everything you need to know about the area.   After chai and a chat a jeep was arranged for the next day.

On our to do list was to arrange tickets for our onward train journey to Palanpur.  So, the form has to be filled in, you queue for your tickets.   With one person in front of you the ticket office is closed for lunch.  Ah, India, it's good to be back!


an afternoon trip out to the village of Nirona 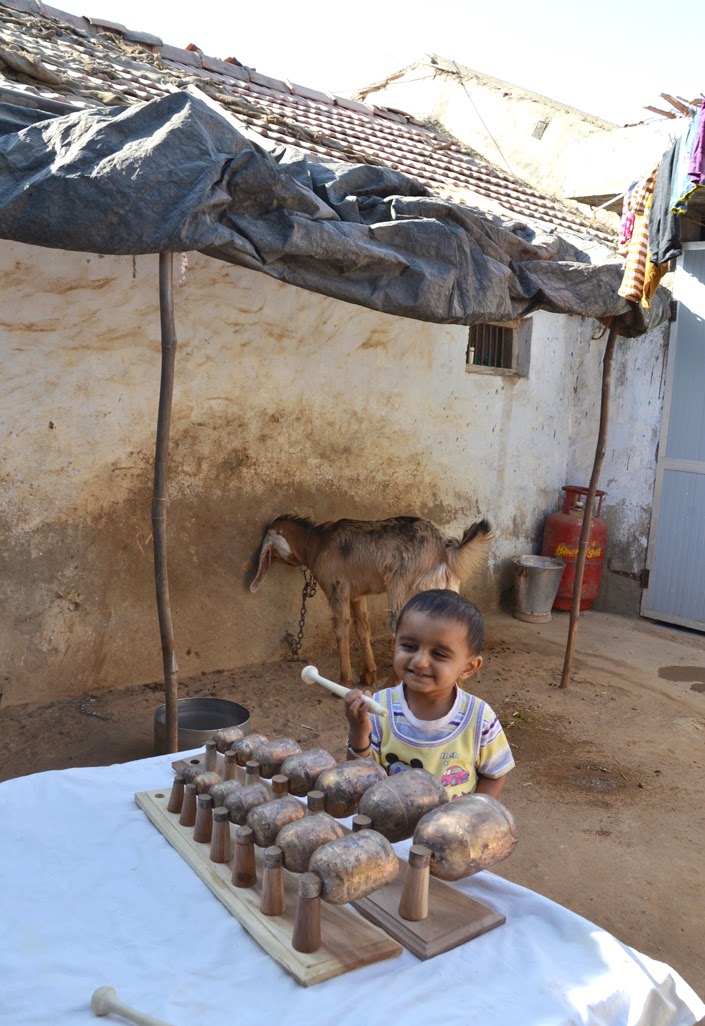 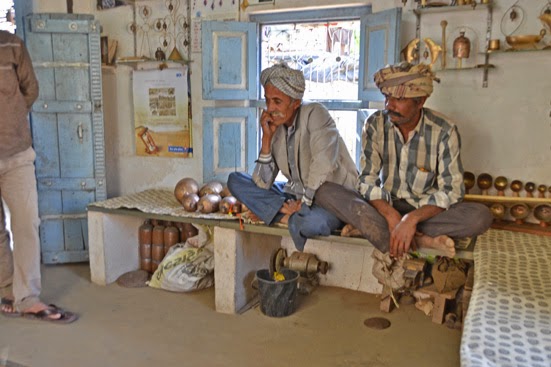 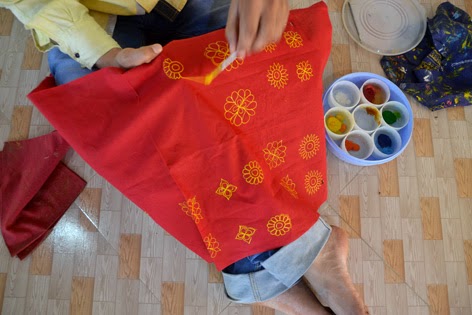 quite an amazing process   originally from Persia  oil is made from the castor oil
plant and mineral dye added  this forms a really gloppy mixture, picked up with a 'stylus'
and drawn pulled onto fabric rather like icing sugar  when the design is complete the
cloth is folded to produce a mirror image

all very clever and fascinating although I have to say the end result of the design
feels rather like rubber!   So many pieces to look at and admire the craftsmanship 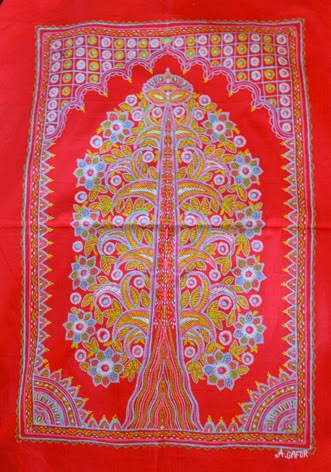 the lac man and dolls 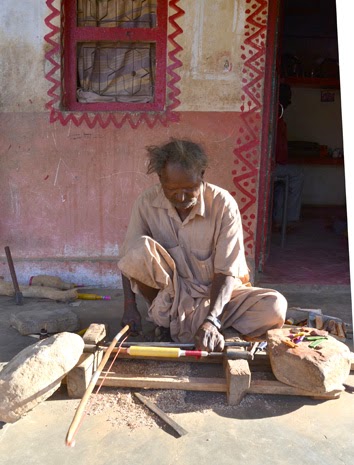 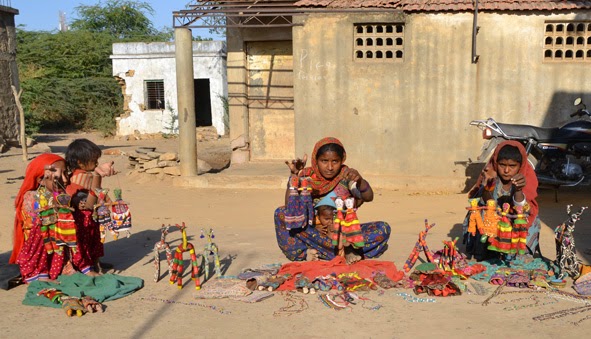 I have quite a collection of these scary dolls, and every time I have visited
the village I end up buying more  - apparently they are made by the children
and in small village communities  every rupee helps

Posted by Tiggy Rawling at 12:39 No comments:

a little darning for No. 2 son 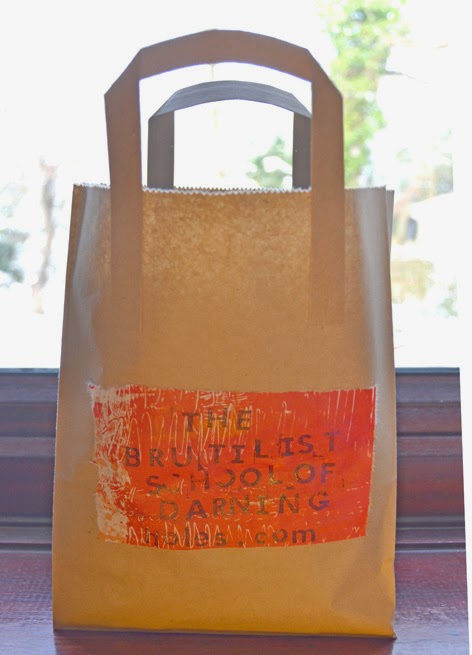 (with snow in the background)

Posted by Tiggy Rawling at 10:39 No comments:

Remembering January and glad to be in February!

I missed my 'Blog Birthday'.    10 January 2008 was the date of my first post.
I was off to Bhuj to attend a Kala Raksha mela, which was amazing.
So seven years have gone by.   It's been lovely revisiting my visual diary. 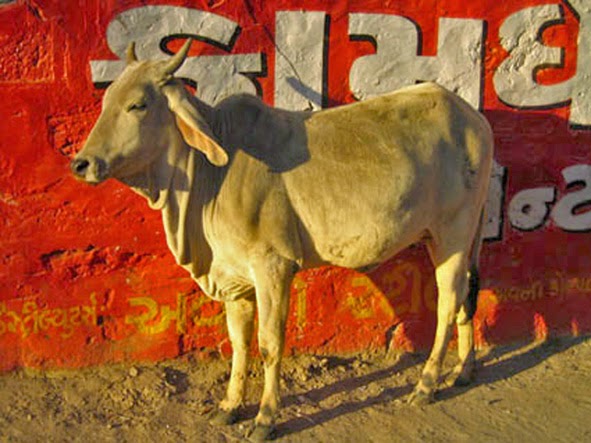 so after a less than exciting January we are off to Bhuj, Kutch tomorrow
from Bhuj there will be a long nine hour train journey to Palanpur through
the middle of Gujarat.      Last time we did that trip there were some
very interesting and colourful passengers!    Onward through Rajasthan,
ending up in Udaipur and then home.

My  Summer Workshops programme has been sent out.    There were a few
e mails returned as undeliverable - perhaps a change of e mail address?
If your name was on my contact list and haven't received a copy,  or, if you would
details,  contact me

Posted by Tiggy Rawling at 11:48 No comments: