After an amazing few days in Varanasi, a short spell in Kanha, we are now in Jabalpur, en route to Bundi.
On our last morning stroll along the Ghats, Keith had a haircut and I had a massage in a unexpected way, that can only happen in India.  OK Keith was thinking of having a haircut anyway, and the barbers were doing a roaring trade in shaving pilgrims head.   Having a bit of a tea break he suggested that K might like to have his hair cut.   Making sure that it was a trim only he agreed.  Meanwhile, his friend kindly covered a stone wall with a rag for me to sit on.  Within seconds I was having a head massage, neck, back, and eventually a full massage.  Keith was the next 'victim'.  How did that happen?!!!
We took the overnight train south to Jabalpur, then car to Kanha National Park.   Driving through teak and sal forests -the sal tree grows straight and very tall, used by the British as sleepers when the first Indian rail tracks were laid - fertile land where crops were being harvested.   Lakes and dams, lots of dhobi wallers working hard.
We had booked to stay at Pugmark Resort - quaint and a total shambles.   However, we did two safaris. Buffalo, spotted deer, antelope, monkeys by the cartload, parrots and assorted birds but not until we were on our way out of the park did we see the back of a tiger disappearing over the hill. 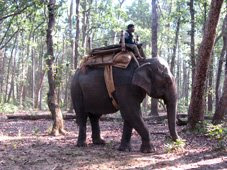 The elephant was also looking - no luck there either.
It was Diwali - festival of lights while we were in Kanha.   The night sky was full of fireworks, whizz bangs, and chinese crackers going off at a great rate. 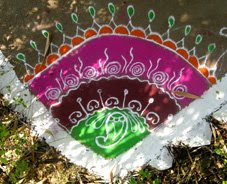 Rangoli designs on the floor - made from coloured powder. 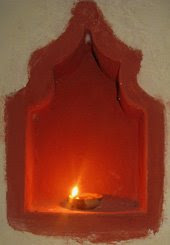 Our own little Diwali light outside our 'hut'
We decided to cut out losses and head back to Jabalpur, try to transfer our train ticket and get to Bundi a day early.
No luck with the ticket, being Diwali everyone is on the move - rare sight nowadays, people hanging out of trains trying to get home for the festival.
It was meant to be!   Here I am sitting in the Hotel Krishna, on my laptop with wifi connection, happily passing the time until tonight's train at 8.15.    We took a trip to see the Marble Rocks on the holy river Narmarda - in a boat, probably meant for 12, but carried 28, and I don't swim!   There is a very interesting museum opposite the hotel.
Felt I had to mention in the visitors book that perhaps the entrance charge could usefully be spent on a bit of dusting.
The textiles were filthy.
So, moving on, time to pack ourbags and catch that train.
Posted by Tiggy Rawling at 11:11 No comments: 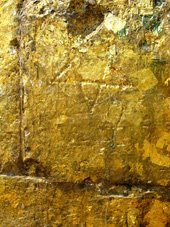 Just time to post another blog! A lump of gold or rather a stone column covered in gold leaf 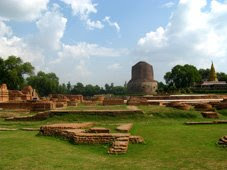 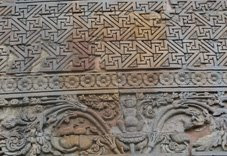 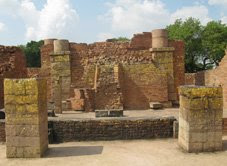 and this is the temple where Buddha meditated and the two
columns are covered in gold leaf, some very old, some new and glittering in the sun.
Such a peaceful place to visit, after hurly and burly of Varanasi.
Time to catch the sleeper to Jabalpur, then to Kanha to hunt tigers on an elephant!

Posted by Tiggy Rawling at 15:07 No comments: 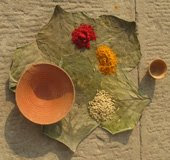 We seem to have been spending most of our early mornings and evenings enjoying life on the ghats. Totally intriguing, number one for people watching. Apart from the holy men, monks, baby monks, prigrims, people doing their daily puja, there are the touts, beggers and, of course, tourists. The first morning we took a two hour boat trip on the Ganga to watch the sun rise. Magic - little bowls with flowers and candles floating in the dawn light, the buildings in the distance looking very mysterious, almost of another age. The last two mornings we walked to greet the sun, and tonight, before we catch the overnight train, we will have an evening boat trip.

One of the young monks greeting the sun

Amongst the many boats I loved the pattern on this one

We did a side trip, of course, to see the silk weavers. Silk thread and gold thread, intricate patterns, and quite rightly, very expensive. A long scarf can take up to four weeks to make. 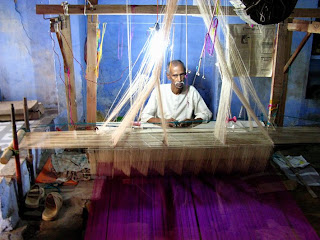 A silk weaver at work 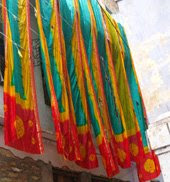 What an incrediable place. All life, and whatever it can throw at you is here. Internet cafe located, not possbile to use my Apple Laptop, so will do my best with the PC! We are not good friends. A few pix for now. 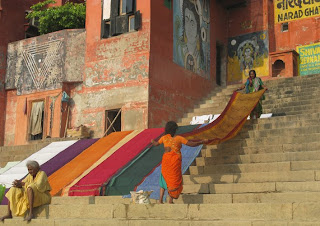 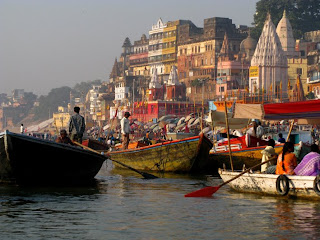 7.00am the main ghat teeming with boats and people 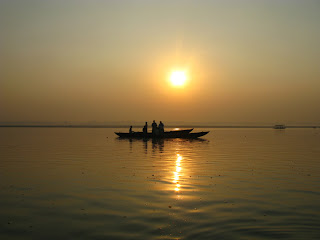 6.15 am sunrise over the Ganges

It's been a busy week, mainly involving dyeing velvet for scarves.   Slightly held up with dismal skies which eventually cleared so at least I could see the proper colour of the dye pots.   In fact the Indian Summer returned, so much so I managed to sneak in the Really Really Last 2008 Indigo Vat. 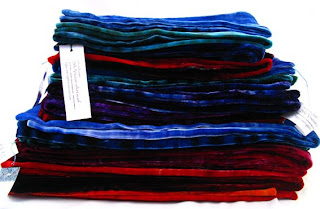 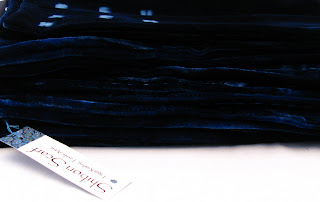 A pile of procion dyed scarves, rich burgundy, burnt orange, purples, teale, wine and rich blues.
Indigo velvet, there's quite a few here, although it looks  like one lump!  This was an added bonus due to the kind
weather, and it dyed the most beautiful deep blue.  Very difficult to show the real colours.
Scarves delivered today, next task is to clear up the 'wet room', as I grandly call our conservatory (which also serves as a laundry room - have to be very aware of loose dye when a certain gentleman's light coloured shirts are about).  I shall leave it gleaming, with all dyes, pots, brushes, buckets et al tidied away.   This only happens once a year.
On to work room - same procedure.   It does look nice when done, but soon reverts on my return.
Oh yes, major housework - then packing!  Hurrah.
We are off on Thursday, so this will be my last blog until I get to the subcontinent - see you there.

Counting the days (12 sleeps) before we set off on our travels.    We have the visas at last, having had to jump through hoops with the new system of outsourcing.  So much easier to just rock up at at the Indian Embassy in London, with the added option of taking in exhibitions or shopping opportunities.
Meanwhile tasks to complete, and general sorting of workroom.  Possibly the tidiest it gets!
Indian textiles/stitching workshops over for this year.  It's amazing what clutter is shoved into files through the year. Some pieces are worth keeping, and thinking on for future projects:-
These are stitching samples, on a background of different fabrics, dye painted.  It is an on going 'rag' - which appears and disappears in files or work boxes. 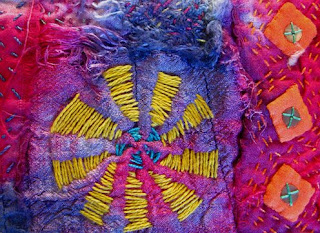 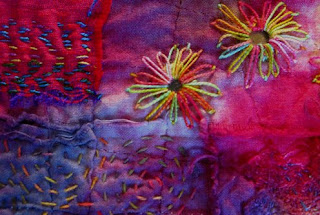 Running stitch and lazy daisy on machine cut mirrors - often sold as shisha.
(Don't start me on that one!) 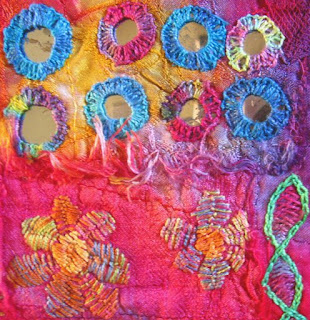 Mirror work, Indian filling stitch and closed herring bone stitch - pretty colours!
So today, putting the summer plants to bed and planting up winter pansies.   Another shed load of leaves to deal with. The sun is shinning, it's warm, better get out there.
Posted by Tiggy Rawling at 09:09 3 comments:

There's a new exhibition at Walford Mill showcasing students work produced at workshops held at the Mill this year, which include:
Tie dye t shirts from my childrens' workshops.   At last I see this season's style! 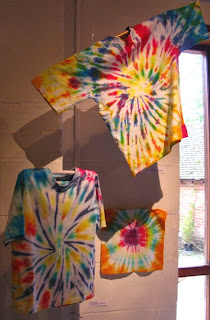 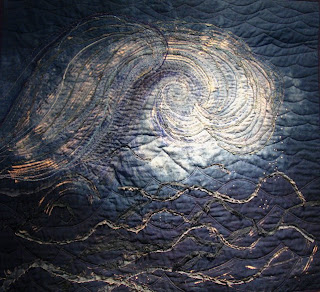 Open Event is being held to celebrate the National Big Draw Event 2008.   Check out the website, there's lots going on, and if you are in the area you can join in!
Posted by Tiggy Rawling at 08:15 No comments: