Or, back to the clamped piece!  It is
just the size for a Journal Quilt, although
I had to trim the top and bottom a tad close
to the circles.  Free machine stitching,
as the mood took me. 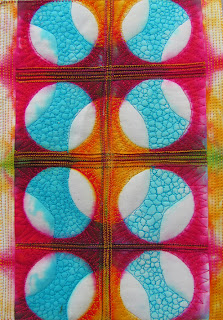 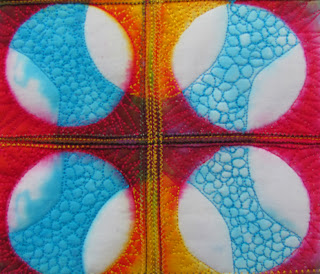 Last night was the coldest this autumn.  Frost on my car - shock
horror, it's too early for this isn't it?!!   When the sun came up
everything looked wonderful.   The trees are slowly beginning to
turn at last, but odd things are happening in the flower beds.
Spring bulbs are shooting already, they are going to be sorry.

Some pictures taken in the late afternoon sun. 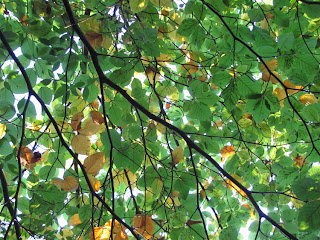 the beech tree at the bottom of our garden - just
showing orange leaves.   It looks lovely with the
dappled light shining through.

and the huge trees next door 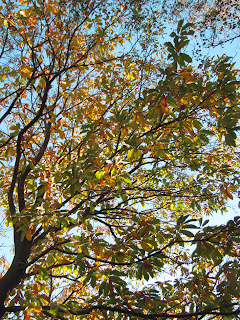 a sweet chestnut has already taken on an
autumn look.  The bonus on this one, we
harvest the chestnuts, as do the squirrels 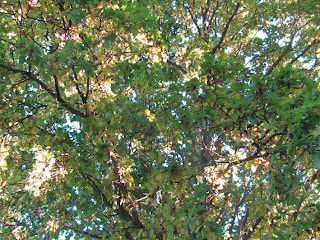 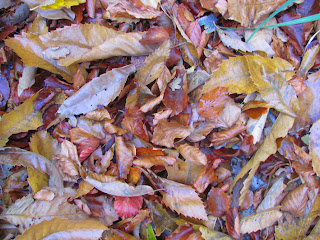 and lots of these.  Oak leaves will tumble down
until December and will be knee deep.  Only
joking, but it feels like that when I have the task
of clearing up.   Leaf compost, I don't think so.
There will be more bags than space to put them!

So today, a check up at the dentist.  Always glad
to tick that one off.   India visa applications posted.
Time to fly to the sun.  Afternoon in the garden,
making a start clearing the fallen leaves.
Posted by Tiggy Rawling at 17:26 No comments:

With some left over dyes and various lids, a little more playtime.

First of a 'flag fold', clamped with milk container tops. 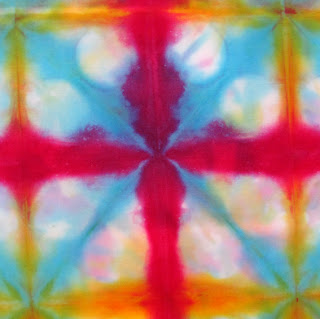 The circles did not penetrate the whole of the
folded cloth.  However, briefly rinsed and left in
the bowl I discovered an interesting dye run -
if you like pastel!

At the other end of the cloth two evil eyes are
watching me. 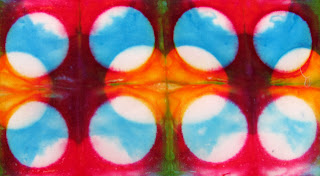 Great - I think I can work on this idea.

Play time.  You will need: 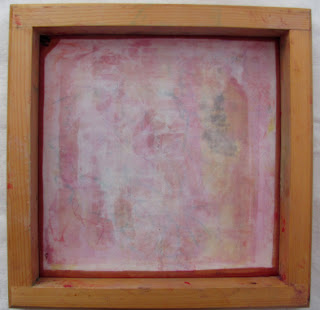 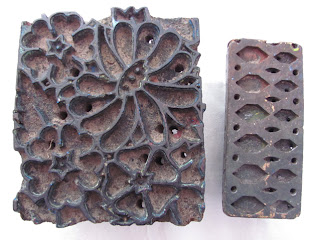 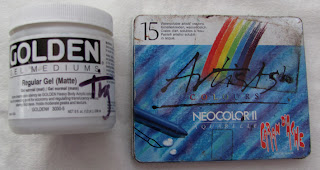 Yep, got all those to hand

I took rubbings direct onto the screen using printing
blocks and crayons.   Then loaded screen with Golden
Medium to print onto cotton.   A pretty good print. 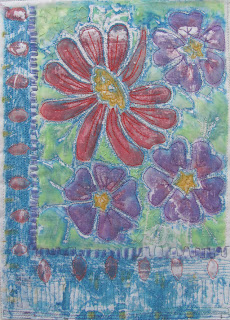 Conclusion - Worked well, although colours
were not as expected - darker.  The
cloth has a slightly plastic feel.  Not sure I
like this.  I tried hand stitching in places.
A bit difficult to say the least.  Machine
stitching, yes, but no room for mistakes.
Needles leave holes that can't be removed.
Some machine embroidery threads seemed
to shred and break.

Well, checked that technique out.  Will I
do more?  The jury is still out.  Sample to
be filed for future reference.

At home I have several bird ropes, mostly brought back
from my travels.   In the conservatory there are a couple
I made way back.   By popular request I have at last
relented, and at the workshop on Saturday birds will
be the order of the day.

I had to make a slightly more exotic bird, just

for me.   Unusually, it's white silk, with
recycled sari silk tail, and a raggy tassel,
with bells.  Tiny shisha on the body and a
plume of beads on it's head. 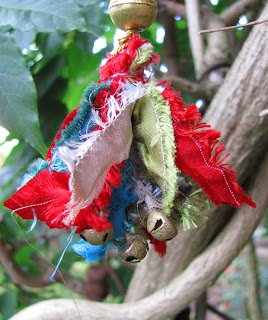 Hopefully we are off to India in three weeks

or so.   The Bird might join us in our travels.
Posted by Tiggy Rawling at 12:34 No comments: 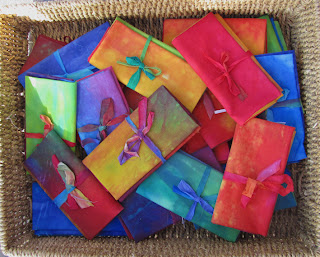 Not a lot done, obviously, over the past two weeks.  Indeed, the urge
'to do' quite deserted me.  However, with a workshop this weekend
action had to be taken, and I'm getting back on track.
A basket of dyed fabric parcels - oh so good to get into colour again.
Experimentation with a silk screen, some crazy clamping which is
still batching.   And a bird, still being stitched, to take me to
magic places.
Posted by Tiggy Rawling at 15:54 1 comment: 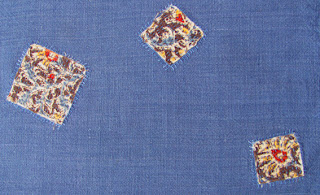 My favourite indigo kurta suffered a couple of sparks
from the barbecue. 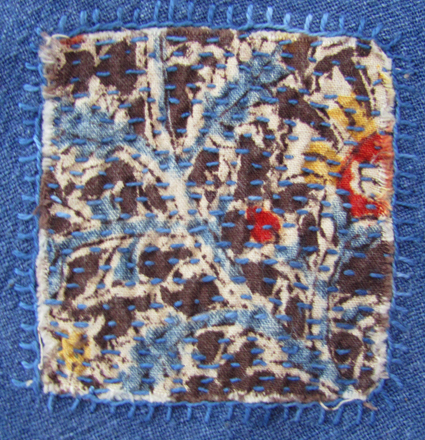 It's that time of year again.  The birds are flying
off to warmer climes.   I can feel a trip to India
in November might be a distinct possibility.
Posted by Tiggy Rawling at 11:47 No comments:

A magical night in September

A first night performance by The Paper Cinema, The Rock Charmer.
We foregathered at The Square and Compass pub in Worth
Matravers, for a pie and a pint before progressing down the
beautiful valley to Winspit quarry on Dorset's Jurassic coast.

A perfect night - a bright half moon, a little chill in the air.
Bright stars, lights from boats at sea, and the beam of
light from Portland Bill lighthouse slicing the sky.

On entering the quarry, a circle of hurricane lamps;  the
quarry caves looking inviting, scenes of jurassic life
forms and atmospheric music. 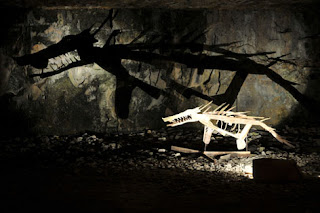 Hay bales to sit on, The Paper Cinemas was
projected onto the cliff face.  Bats flying, and
atop the cliff The Plough looked down on us. 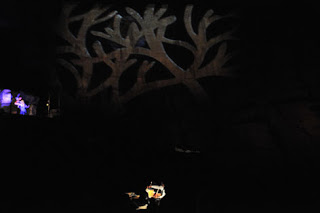 To get a sense of scale, on the left is Kimmo Phojonen,
and to quote the blurb, a phenomenal
accordian player, which he was, and more.
In the foreground The Paper Cinema projection unit.
Pure magic.

The Paper Cinema is my son Nic, who has created this
fantastical project.   Past performance venues have
included Tate Britain, the V&A, Edinburgh Festival to
name but a few, plus tours to Europe.
Too complicated to explain!  There is a link on my
sidebar, to fill you with wonder and delight.

The dinosaur in the caves were made from collected
driftwood and part of a project with local
Dorset schools.